International organization recognizes Saskatchewan data expert; Canada is ‘Better off for her efforts’

The recipient of a 2019 international award for data interoperability completes the recognition of a leadership team that allowed for effective communication of medical codes and diagnoses across Canada.

Lorie Carey, CIM P.Mgr, received the 2019 LOINC Award for Distinguished Contributions at this year’s LOINC Laboratory Committee Meeting, June 6 at the Regenstrief Institute in Indianapolis. Carey, of Saskatchewan, has been instrumental in improving Canadian data standards over the course of her career. She has played a key role in developing Canadian data standards, improving point-of-care delivery and health research.

“Many of us share a vision of having key health data like lab tests available to patients and providers wherever they are,” said Daniel Vreeman, PT, DPT, MS, director of LOINC. “Lorie has been instrumental in bringing that vision to life across Canada by her exceptional work to accelerate LOINC use and tailor it to the Canadian context.”

The award honors individuals whose work advances the interoperability of medical data so that it can be electronically exchanged, understood and used to improve health. LOINC, based at the Regenstrief Institute in Indianapolis, is the world’s most widely used code system for identifying medical tests, observations, and documents. It was created at Regenstrief in 1994 and is now used in 175 countries. 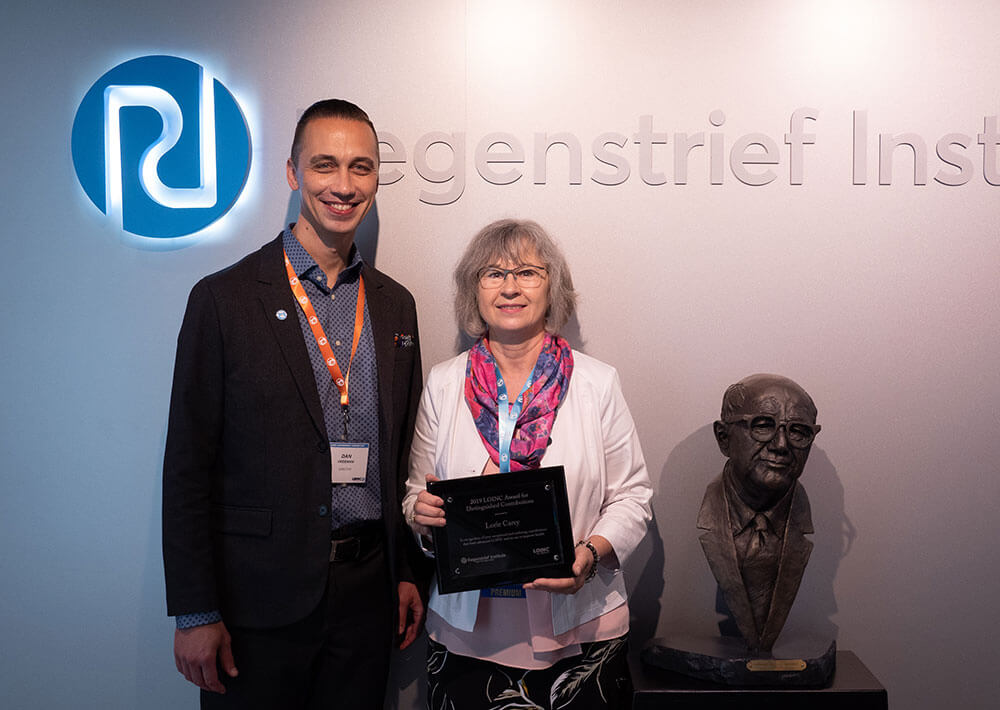 With support from the U.S. National Library of Medicine, the Regenstrief Institute and other organizations, LOINC is an open, freely available standard.

“Lorie is almost single-handedly responsible for the uptake of the LOINC standards in Canada, and the country is better off for her efforts,” said Pierre Leveille, Canadian Institute for Health Information (CIHI) official. “Her work has supported every jurisdiction in Canada. Her enthusiasm has been sustained and very contagious, and she has been deliberate and determined. Lorie has encouraged and fostered cooperation and collaboration amongst laboratory professionals, information system professionals, clinicians, health delivery organizations and governments.”

The CIHI provides comparable and actionable data and information that are used to accelerate improvements in health care, health system performance and population health across Canada.

Founded in 1969, the Regenstrief Institute is an internationally recognized medical research organization that focuses on innovations and research in biomedical informatics, health services, aging and implementation science.

Another team leader and previous LOINC award recipient Pamela Banning, senior healthcare data analyst at 3M, says, “Lorie Carey’s interactions with the users and developers of LOINC for over a decade deservedly earn her the recognition of her distinguished contributions on behalf of the citizens of Canada and her colleagues all over the world.”

Carey developed the pan-Canadian LOINC Observation Code Database (pCLOCD), a collection of the most relevant codes for Canadians that pulls from the larger LOINC terminology. Adopted in 11 of 13 Canadian jurisdictions, p-CLOCD has been serving a population of nearly 40 million. She also assisted in the development of Canada Health InfoWay’s Request Management System, which has streamlined the process for requesting updates to LOINC, improving the standard around the world.

“Lorie Carey has so greatly enriched LOINC and its global community,” says Dr. Vreeman. “Her work has unquestionably improved health and the efficiency of health systems.”